by 0x Salon and daniel shinbaum
0x004 Report I ::: (Not) Seeing the Forest for/from the Trees
·
This Pub is a Reply to 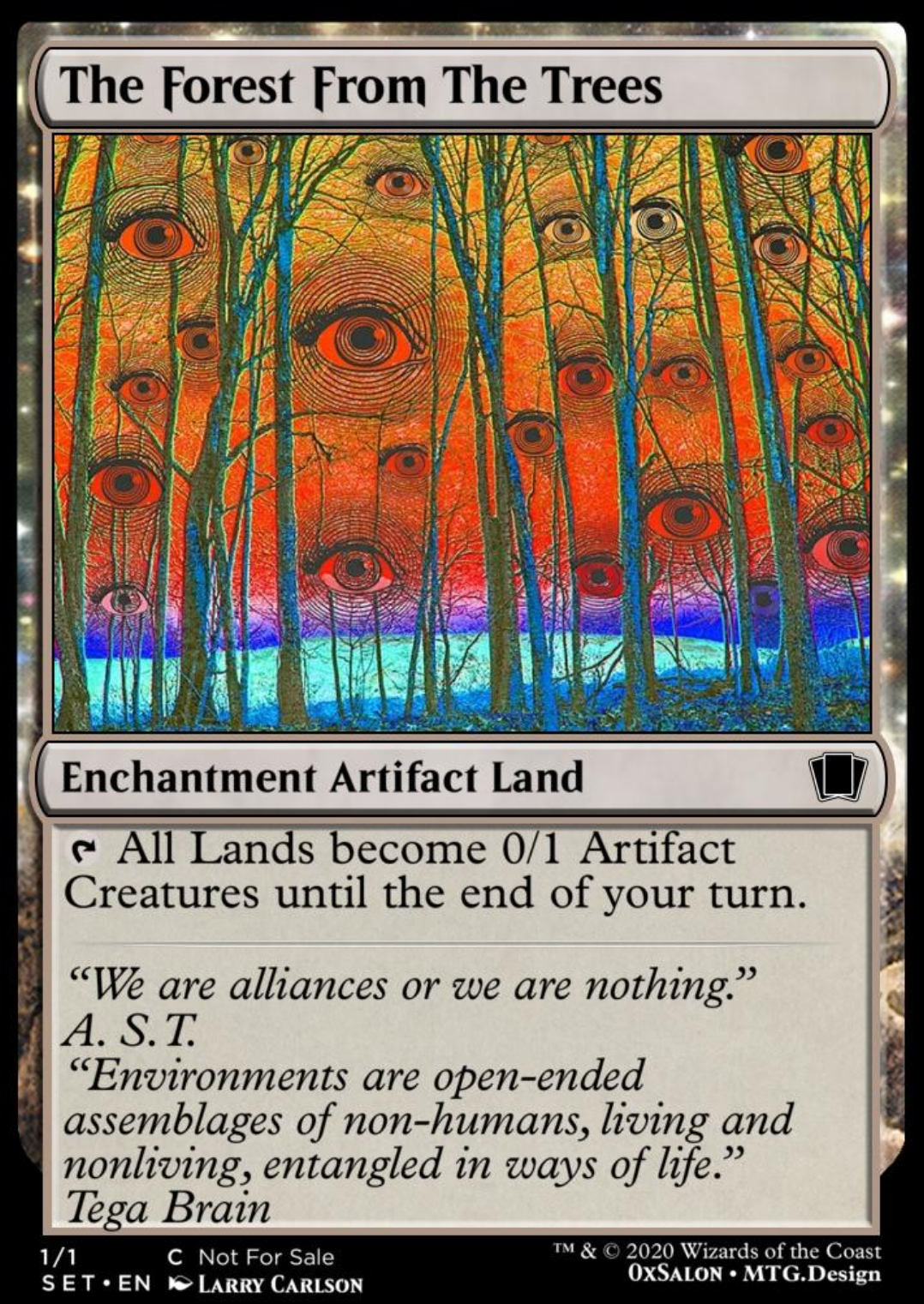 This report follows the first to follow up on those topics. With this series of write-ups, we provide a more concrete form for the ideas that floated through our discussions and enhance and develop some of the germinal ideas that took root during the Salons.

The title of this event series, The Forest From The Trees, alludes to an English idiom that one might use to cast aspersions at someone who fails to grasp a general situation because of their preoccupation with minor details: they “cannot see the forest for the trees.”1 The proverb describes a gap between micro and macro perspectives, and implies a judgement that privileges the general over the particular.

But this standard interpretation of the proverb is not the only one. Depending on the context in which the proverb is uttered, a listener might interpret the phrase differently. The way(s) that someone might (mis)understand the proverb depends on their personal experience and historical context: have they heard the phrase before? Or, are they interpreting it literally, and if so, what sort of literal interpretations make sense given the material conditions at that point in history? As society changes over time, the range of meaningful interpretations of the proverb adapts along with it. Five centuries of declining symbolic efficiency has opened the proverb up for collective authoring. The self-referential materiality of text itself substitutes for a narrative unfolding of history from a point of origin.

The first reading can be traced back to the Renaissance. In this instance the proverb reproduces the model of Christian spirituality where one’s body parts are a vessel for their soul. Additionally it models a rational system where unique elements become normalized and compatible within a shared system.

The first recorded use of the phrase is found in Sir Thomas More’s 1533 treaties The second parte of the co[n]futacion of Tyndals answere in whyche is also confuted the chyrche that Tyndale deuyseth. And the chyrche also that frere Barns deuyseth. For historical context, The Confutation comes after Martin Luther’s 95 Theses (1517). As a response to the tumult unleashed by the Protestant Reformation, The Confutation lacks the classical imagery found in More’s most famous text, Utopia (1516), and it’s replaced by More’s overtly religious endorsement of the English Catholic church.

In the passage where More writes the proverb, he rehearses an argument made by his Lutheran opponent. More deploys the proverb to imply that his opponent’s argument is nonsense. He presents his opponents argument via a series of (supposedly absurd) visual metaphors where a general structure is visible despite the invisibility of the elements composing it. More writes:

answereth he nothing but Holy Church herself is a congregation of good Christian men and good Christian women, of which every one is visible, but the congregation of them is invisible… he would tell us that there were a woman that went invisible, and that he meant not that her hands, or her feet, or her head, or any part of her were invisible... but, all her parts being visible, herself were yet invisible. And as he might tell us that of Paul’s Church we may well see the stones, but we cannot see the church. And then we may well tell him again that he cannot see the wood for the trees. [abridged for brevity – see footnote for full unabridged excerpt]2

Ironically, as contemporary readers we see nothing absurd in More’s characterization of his opponents stance. Contemporary liberal capitalism encodes the idealism of the Protestant church such that it’s logic no longer appears as scandalous misinformation.

A Mathematical Theory of Communication with Ecological Proverbs

The phrase was later canonized in the glossary to The Proverbs of John Heywood (1546):

An olde saied sawe, itche and ease, can no man please.

Plentie is no deyntie. ye see not your owne ease.

I see, ye can not see the wood for trees.

An old said saw; itch and ease can no man please.

Plentie is no daintie; ye can not your owne ease.

I see, you cannot see the wood for the trees.

The mass production and distribution of a glossary of proverbs removed the proverbs from their original context. Haywood’s Proverbs collection relies on the language’s robust ability to recombine elements without regard to their specific context.

Claude Shannon’s mathematical theory of communication codifies this quality of language into quantifiable law. Information theory represents the discovery that language is governed by the laws of probability. In his 1951 paper “Prediction and Entropy of Printed English” Shannon describes the experiments that led him to discover and quantify this law. He notes, however, that his discovery applies universally to normal language. Yet the significance of this finding escaped him. When commenting on the successful results of his experiment, Shannon writes:

The new method of estimating entropy exploits the fact that anyone speaking a language possesses, implicitly, an enormous knowledge of the statistics of the language. Familiarity with the words, idioms, cliches and grammar enables him to fill in missing or incorrect letters in proof-reading, or to complete an unfinished phrase in conversation.

Results of this order are typical of prediction by a good subject with ordinary literary English. Newspaper writing, scientific work and poetry generally lead to somewhat poorer scores.3

In these passages, Shannon notes that the law of information theory holds true under the condition that the message is communicated between senders and recipients with a normal understanding of language. The presence of a normalizing force is presupposed in information theory. But as anyone living outside the norms of white heteropatriarchy can attest to, these norms are not law in the world of living and breathing subjects.

Enclosure of the Commons

The original reading of the proverb stays true to its roots in the end of the Middle Ages, or the dawn of liberal modernity. This next reading is characteristic of early industrial capitalism.

Although existing literature fails to acknowledge alternative uses of the idiom “not seeing the forest for the trees,” participants in our Salon discussions repeatedly and independently claimed to understand the phrase in ways that break from the orthodox interpretation.

One common (mis)understanding emerges from the polysemous meanings of ‘wood’, where it stands for the product of felling, distinct from the material that naturally makes up trees. In this reading, the woods linguistically transform from a place into a product. To “not see the wood for the trees” expresses blindness or ignorance towards the value of commodified wood because one is absorbed in the tree’s natural beauty.

However, the value judgement at this level of (mis)reading can be inverted and still make coherent sense. Within this paradigm, the dual meanings of ‘wood’ (as a finished product and a yet-to-be-produced material) can also split the meaning of ‘trees’ along the same fault lines. With this in mind, the phrase expresses a blindness to the grandeur of the forest rather than a blindness to its grand market value. One is mystified by the fantasy of extracting riches from the trees while the forest disappears from their field of vision. The ambivalence of the value judgement marks it as native to capitalism. 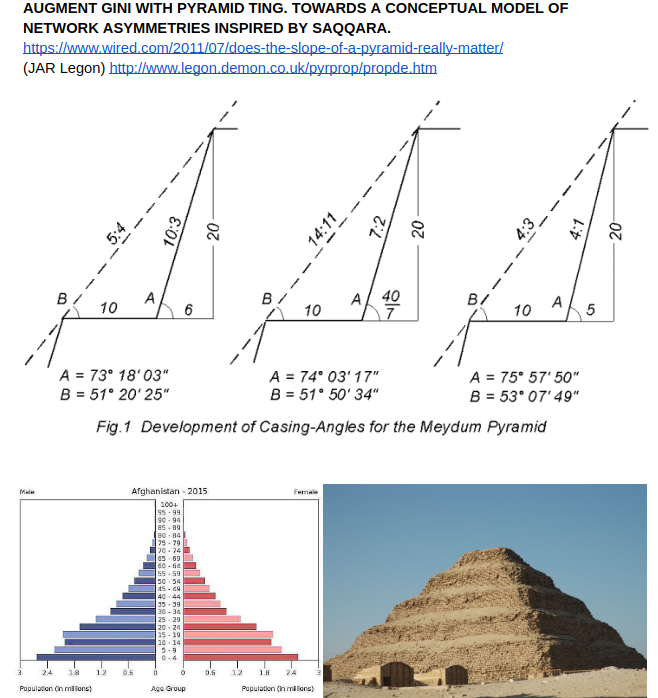